Bob and Sherry goofin’ around at the wedding pics…

Dancing at the wedding

FUN! Last blog we were preparing for October wedding in Arizona. Beautiful bride and groom plus a super fun time.

Is Louie the bear really driving the Toyota pulling the trailer????

FUN! Organ Stop Pizza in Mesa, AZ, hosts Wurlitzer pipe organ with nearly 6,000 pipes! Enjoyed two-hour concert while devouring some tasty pizza. Great family atmosphere. (Colorado trivia: This Wurlitzer pipe organ was originally built in 1927 for the Denver Theatre in Denver, Colorado and continued in use for many years before being silenced by a fire that damaged essential parts.)

HECTIC – Drove both cars and trailer from Arizona back to Southern California near Salton Sea. Really miss being in the Yukon with Sherry. Being together is a whole lot more fun than driving separately.

SAD… Sherry’s father passed away in Colorado. Age 92. He will be missed.

HECTIC – Sherry immediately drove to Colorado to be with her mom after learning about her dad passing away. Bob flew next day to Colorado for funeral. Sherry stayed with her mom several weeks helping out.

HECTIC – Sherry’s and her mom Bev got things taken care in Colorado so… Time to head south to Arizona for the winter! Bev flies but Sherry drives from Colorado to Tucson a few days before Bev – in time to pick Bev up at the Tucson airport. Stays in Tucson a few weeks to help Bev.

“Back to the Future” DeLorean

FUN! While in Albuquerque visited National Nuclear Science and History Museum. Saw (“PLEASE DON’T TOUCH!”) DeLorean from “Back to the Future“!

Time lapse of eclipse in the desert

Time-lapse photo of eclipse in the desert.

HECTIC/FUN:! Bob drives from California to Arizona for some work stuff plus a few days fun in Tucson with Sherry and Bev.

FUN! Bev and Sherry drive Tucson to California for Christmas with Bob at Bashford’s RV Park near Salton Sea. Lots of fun Christmas caroling on the hay ride – especially with all the (alcohol enhanced) “egg nog” served at each stop along the way. Karaoke after caroling (and remember the egg nog?). 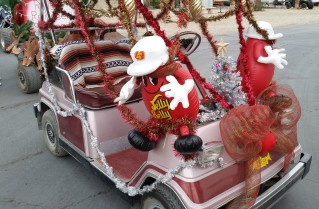 Bob’s rendition of Mick Jagger singing “I Can’t Get No Satisfaction” caused Bev to ask Sherry if Bob gets like this often! Crowd loved it.

Unexplained lights in the night sky. Santa and his reindeer perhaps?

FUN! Slab City with Bev. Pictures show some of the creative artistry from the residents. 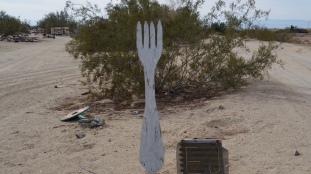 FORK IN THE ROAD! at Slab City 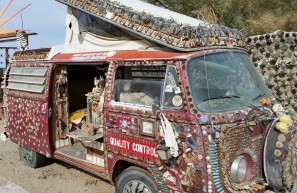 HECTIC – Sherry and Bev make hasty exit from California back to Tucson when Bev learns her grand-daughter Brenna is in Tucson for a few days from North Carolina.

FUN! Sherry and Bob are finally together again in the trailer at Bashford’s RV Park near the Salton Sea in sunny Southern California. Location is warm and sunny – far from the fires, mud-slides and heavy rains. Whew! 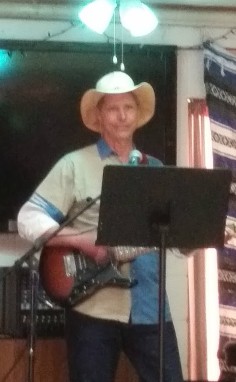 FUN! Sherry is the popular massage therapist in the park. Bob fills in as guest musician for  Happy Hour, dances, monthly breakfast, and church.

WHEW!   Thanks for hanging in until the end.  Until next time as we continue On Our Adventure!