Bob getting drenched at Niagara Falls

Romantic Niagara Falls. Love being there together while we get drenched on the American side, and enjoy the overview from the Canadian side. 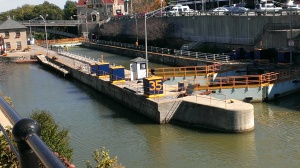 Erie Canal. In the early 1800’s, New York hand-dug a canal from Lake Erie to the east coast, 323 miles. The canal played an important role in the expansion of early America. Fun watching a boat use the canal locks.

Hitch Hiker. While in Colorado, we notice a fresh spider web each day on the back of our car. That spider is still with us, making webs each night, surviving highway speeds from Colorado to New York, car washes, rain, and frost. His name? “Spidey”. He’s part of our traveling crew.

Everything starts somewhere, including today’s Modern Oil Industry. The first oil well was drilled in Titusville, Pennsylvania, 1859. Was in an area known for “the black goo” that fouled the water.

Enjoy viewing the beautiful fall colors on the east coast with Bob’s cousin Wayne and Cecile.

Chocolate! Hershey, Pennsylvania. This town was founded by Milton Hershey where he built his Hershey Chocolate empire. Mr. Hershey is the Henry Ford of chocolate, transforming a previously expensive product affordable only to the wealthy, making it affordable to the masses thru assembly line production techniques. 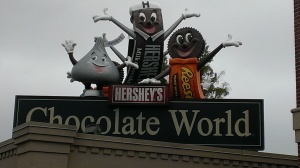 Friday afternoon. A cold beer would be nice. People in Pennsylvania laugh when we ask where we can buy a 6-pack. Pennsylvania has “case beer” stores that sell no wine or liquor, only cases of beer. No six packs. Other stores sell only liquor and wine, no beer. We persevered, visited a micro-brewery, ate and drank, and eventually bought a case. 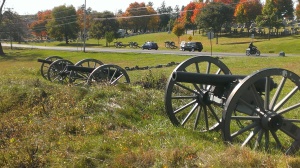 From Philadelphia to Gettysburgh to the 9-11 Memorial in New York City, sacrifices, dedication, and commitment of people in this country is inspiring. Being here makes history come alive. Indeed, Americans are very fortunate due to those who came before them. 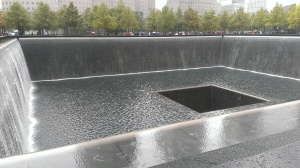 The 9/11 Memorial helps us appreciate the fortitude of the American spirit when our liberty is threatened. 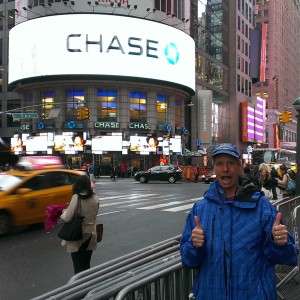 Bob at Times Square in NYC

All of New York City is a bustle of excitement. We enjoy eating delicious New York cheesecake, of course.

Already the end of October, fall is wet and turning colder. We head south, preferring warmer weather while . . .  On Our Adventure!

This entry was posted in Uncategorized and tagged 2014, NY, PA. Bookmark the permalink.