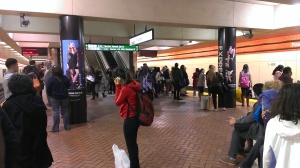 Walking along the wharf, enjoying various singers and dancers on the street corners, and riding trolleys and buses turns out to be a great way to venture around enjoying the city.  Pier 39 is always fun with its tourist places to eat. Be sure to visit Ghirardelli Square and enjoy their chocolate and ice cream creations.

Thanksgiving is non-traditional for us this year by walking around Chinatown, then enjoying Thanksgiving Dinner at a restaurant named Chinatown Restaurant. Dessert at Ghirardelli Square: Two days in a row! 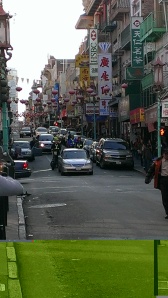 Some things are built to last, such as the electric trolley car we rode that was built in 1929.

Taking the bus, and usually not quite sure where we are, is part of the adventure of traveling in new places. Intending to exit the bus at Golden Gate Bridge, accidentally exit instead at Golden Gate Park. Turns out to be a wonderful mistake. Highly recommend an afternoon in Golden Gate Park with its Museum of Natural History, Fine Arts Museum, Japanese Tea Garden, Rose Garden, Redwood Natural Forest, and artists displaying their latest creations in the center of the Park. 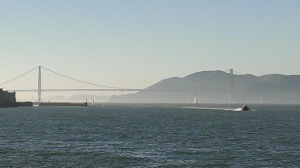 After Golden Gate Park, catch a bus thru the Presidio to Golden Gate Bridge. Fog rolls in quickly here: The sky was clear blue when getting onto the bus, but the fog was so thick upon arriving at the Bridge that it was too foggy to see more than 100 feet on the bridge. It’s a busy Bridge: Cars driving, people walking, and bicyclists cycling across. I walk part way across, visibility still less than 100 feet.

Jewell and Kari after Marriage Proposal on Golden Gate Bridge

Meet Jewell and Kari, who asked me to take a picture of them. He promptly gets down on one knee and proposes to his girl-friend Kari. Fun taking plenty of pictures of the event. Kidded him that it’s good he proposed quickly because his camera indicated low battery. After congratulations, he took a picture of all three of us! (Unfortunately, Sherry missed this day in San Francisco due to that pesky persistent illness.) However, we had a great time in San Francisco, and will be continuing south to discover what else is new to us. Until next time, thank you for following us On Our Adventure!

This entry was posted in Uncategorized and tagged 2013, CA. Bookmark the permalink.