Bicycle rides with Sherry are fast! Wow, she really pedals. Bicycle riding nearly every day. It’s nice to be out riding again. Some beautiful countryside. 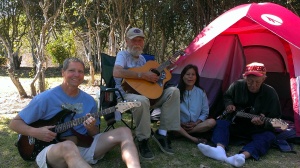 At Lompoc River Park RV campground, the neighbors Tom, Rosie, and Kenny are quite the trio. Kenny is a great guitar player, and I have a lot of fun jamming with him. During the day they are the best of friends, talking intelligently about music and concerts. At night after drinking they yell and scream at each other. Tom finally calls 911. Ambulance takes Tom to the hospital. Kenny and Rosie are in no hurry to follow to the hospital, saying Tom does this several times a month, he just wants attention, and he will be released in a couple of hours. Next day, Tom is home. All good. I pray for them, that they will come to understand they are pawns in a spiritual warfare, and they are allowing the enemy to win.

Facebook isn’t quite the right format, and many people, I find out, do not use Facebook. Set up a blog site on WordPress, register OnOurAdventure.com domain name (surprisingly it was available), and begin blogging.

Plenty of beach time at Gaviota Beach and Guadalupe Beach, where a large fresh water lake sits adjacent to the salt water surf. A first for me!

Guadalupe Beach has a higher concentration of waves than we are used to seeing.

No trip to Central Coast California is complete without a visit to Hearst’s Castle, and we definitely take the tour. Impressive, both William and his father George, and all the vast wealth father George accumulated from mining operations, and the media empire William built. 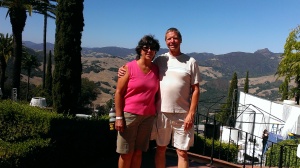 Father George bought over a quarter million acres along the California coast during the 1800’s, much of which has been turned over to California to be taken care of as a museum, including the Hearst Castle.

New Hope Church is our local church in Lompoc, they host a BBQ on Saturday using BBQ’s we’ve seen nowhere else. Locals tell us the BBQ styles truly are a local design.

Sherry by bush in front of fire station in Lompoc, CA

Lompoc has great respect for art and history. The local firestation is no exception, pruning bushes into shapes of firemen.